Darren Morris is a class of 2022 wide receiver for Southern Lab school in Baton Rouge, LA. As a receiver, his shifty cuts and elusiveness make him very difficult for defenders to bring down. With 9 TDs and a 3.3 GPA Darren has been putting up some impressive numbers up on the field and in the classroom his junior year.

What did football teach you about yourself of life once you began playing? It taught me if I get hurt to get back up and to keep on trying until you get better at it. When I first started football, I wasn’t really good at it

Who or what has been your biggest motivation or role model in the sport? My biggest role model is Devonte Adams because I can see on and off the field that he’s got good character and he’s a great football player

What is your favorite memory while playing the sport? My favorite memory would have to be from this year in the Riverside game. It was a big catch, first touchdown of the game. I had one person on me, so I had to take it out of his hands to score.

Outside of sports do you have any hobbies or passions that you do in your free time and what about them do you enjoy the most? In my free time I like to get together with some of my teammates, like the receiver crew. We like to work out, maybe play a game, and just hang out. Working out is one of my favorite things to do.

Do you have a favorite athlete, college or NFL, that you look up to? Devonte Adams is who I look up to

What current player, college or NFL, do you think reflects your play stile the most? I would say Devante Smith out of Alabama. He like to run go routes, he’s quick, and he likes to get the ball. I base my play off of him

For the 2021 season coming up have you set any personal goals and has your team set any specific goals for the season? My personal goal is to get at least over 2000 yards in receptions and our team goal is to win a state championship because we’ve been to the semi-finals three years in a row and I think we can make it a fourth.

What are some things that you would bring to a college team? I would bring leadership, physicality, being physical on the field, and pushing my teammates to get better and better everyday because practice makes perfect.

What’s some advice you would give to younger players that want to play high school football one day? Play as hard as you can every play because you don’t know when it’s your last play. And also, to work out early because when you get to high school it’s a different kind of speed up in there.

This past season was obviously very different with all of the Covid restrictions. What adjustments did your team have to make and how were you all able to overcome that? Some adjustments we had to make was different practice schedules. Sometimes we would have to get up earlier, sometimes later. Doing the rides and with Covid made it hard to get together but all the times we did have, we put in the work. 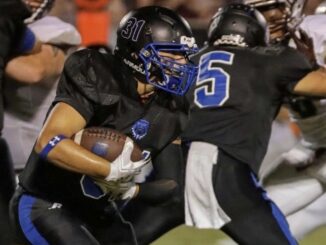 Diamond in the Rough – Koby Linares