Koby Linares is a 5’8″, 205 lb running back currently playing at Springfield High School in Springfield, Louisiana. Having played gridiron football in Texas and Louisiana within the last few years, Koby has shaped himself into being a well-rounded player on the field. This can also be said about him because he has played multiple positions as well. Also, Koby Linares throws discus with the track & field team. Koby values his teammates – on and off the field – and wants the best outcome for his team this upcoming senior season. Koby, with a mindset to go above and beyond, will stop at nothing to achieve his goals.

Alright, let’s establish the basics. When did you start playing football?

I started playing football when I was 6 years old, back when I was living in Texas.

What attracted you to the sport?

Actually, what happened was we were bouncing around house to house and I started off playing soccer. So, I kind of got into trying new sports and I ended up joining football. I didn’t like it at first – I really didn’t. The next year, my mom asked me to see if I could try it again and I told her I would give it one more shot, and I ended up being pretty good at it. That’s how it has been so far, and I’ve loved the game ever since.

Okay, so why did you end up staying with football? Why didn’t you go back to playing soccer?

Probably because of how intense football was – like of all the contact and the running around. That’s fun and not really “getting in trouble” for hitting somebody.

Yeah, I can understand that because there’s not as much physical contact in soccer compared to football. So, I get the “frustration” whenever someone would get a foul in soccer. I’m curious, do you still play soccer today – as a hobby, or do you play other sports beside football?

Outside of football, I throw discus and I like to fish usually every other day, but I haven’t played soccer since middle school.

So, just a double check: you do football and track & field now?

Okay, cool deal. How would you describe your playing style on the field?

Since I came from a school where there was a bunch of athletes, I didn’t really get an opportunity to show my talent out there. So, I started off on a line and I learned to hit people and not be scared to hit somebody when it comes to tackling. Going into my sophomore year, I played middle linebacker. So, my game style has always been aggressive, and it transferred to running back this past year. While being an aggressive running back, I’m trying to get the most yards that I can and of course, I got the most rushing yards in the parish that year.

Wow, nice, very nice. So, you have played multiple positions over the past few years?

Yeah. Every year – it’s not really a standstill position. I’m just an all-round player like they put me anywhere and I’ll play it. This past year I ended up playing corner because one of our players got hurt and they didn’t have anybody to replace him. I also got a pick 6 this past season as well.

That’s good that you’re a well-rounded player. Are you more offensive or defensive?

It’s kind of hard to tell because the past few years I’ve been mostly defensive, but since I became a running back, it’s been more offensive. So, personally, I stay in between both and I don’t have a favorite so it’s either/or.

You’ve been mentioning that you have moved around a lot – mainly since middle school. Is that still happening or has all of the moving settle down for the moment?

Currently, we just moved from Texas to Louisiana.

Okay. I’m sure you were at a pretty big high school in Texas. Could you tell more about the whole experience – with playing for such a large high school and then all of a sudden making that big move and playing football in Louisiana? What was it like as a person and a player?

I came from a really high-cultured high school. They were big on dominance and was a power-house school back in Texas. So, I basically had high standards to produce good for the team. Then, when moving to Louisiana, where it’s more individual talent than it is team talent from what I’ve seen so far. I came in with open arms with all the coaches and everyone, and needing a spot to help out the team. That’s what it’s been all about is to help out the team and I feel grateful for it. The experience going between it has been an exciting transfer – coming from Texas to Louisiana. It’s really exciting for me to do it because it’s out of my comfort zone to do something like that.

Yeah and it’s good to get out of your comfort zone as much as you can, but I’m glad that you’re adjusting well to the whole transfer experience. I’m glad for you. You’re going into your senior season, right?

So, as the senior – about to graduate, you’re looking to playing in college, what are some goals you have for your senior season? It can be individual goals, team goals, or you can address both sides.

For both, we’re hoping to at least get into the playoffs and have a shot at winning the state championship. There’s only going to be like 5 or 6 of us, seniors. So, we have high standards to make the team produce really big. I think we could make it up to at least second or third round if we come together as a team and play more as a team. Individually, I’d like to produce what I did this year and at least go play in a senior bowl game. Also, to get all-parish and all-district again for my senior year coming up.

Good goals – good goals to have. Do you consider football to be harder mentally, physically, or both?

That’s hard to say … I definitely think it’s more of a mental game than it is physical. So, saying when you’re in front of a big crowd or in a big game, like senior night or homecoming for example. It brings up a lot of energy and you have to be mentally focused for you to be able to do what you’re supposed to and be good because if don’t have the mental game right, it doesn’t mean that you’re going to be there and I don’t think it’s tough on the body if you’re mind isn’t in the right headspace.

Right, right and those big games such as homecoming and senior night can definitely have a big mental and physical impact on your body – just like you said. It’s like a domino effect pretty much, if one or the other is out of place. Besides football, and if you’re answer is football – I’ll take it, but what has been your favorite part of high school so far?

Let’s see … honestly, just having fun with my friends outside of school like the hangouts, having a Superbowl party during football season, and just grinding in the offseason – working out and that stuff. I don’t know why; I just love working out for some reason. It’s one of my favorite things to do since I’ve been in high school.

Yeah; you got a favorite kind of workout?

I like doing our powerlifting workout which is high reps and high weight at the same time. I like doing bench presses, power standbys, and dead lifts. I’m not a big fan of squats, but I can do it pretty good.

So, you’re more into the heavy weightlifting versus the straight cardio, running workouts. I get it.

Yeah, I might not be the best, but I can get the job done.

I wish I could do all of that heavy weightlifting, or more of that. My body tends to favor the cardio workouts more. Anyways, what would be the dream college to play football for, or just go to in general?

My favorite, dream college I’ve had since my first time playing in little league – back in Texas – and my team was the A&M Aggies. So,  I’ve always looked up to and going to play for Texas A&M. I mean, honestly, that’s my dream college, but if I get an offer from anywhere else, I’ll take it.

Yeah, but if you got that offer from Texas A&M?

Yeah, I would definitely go over any other school.

I personally feel that. I was like that with LSU when it came to colleges. So, I totally get it. What motivates you to keep playing football? Is it the people or is it the game itself – what is it?

It’s definitely the experience of playing with different people. Knowing that you’re going to have more people coming in at freshmen year and teaching them and bonding with them. I think that’s honestly my favorite part of football still – just connecting with the teammates.

You’ve mentioned just now helping the freshman out. Do you have any advice you would like to give to those freshman players or any player that looks up to you?

Back in my high school, I’d preached to freshmen to get in the weight room and get bigger because the opportunities are going to come. Just because you’re a freshman and you’re not playing does not mean that you’re going to play sooner or later and make a big goal or be a part of the team.  So, I told them to keep pushing, keep going at those reps, and to be able to fill in that spot whenever the team needs you. That’s what I’ve always told the freshmen and underclassmen that I talk to.

That’s good, that’s some pretty good advice right there – I like that. How do you prepare for gamedays? How do you get into that gameday mindset – listen to certain music or say a little chant?

I like getting a little hype with the team with the huddle and the chant that we do. Honestly, I don’t really listen to music that much before any game because I start getting sleepy whenever I listen to music, but that’s me. So, I like talking to my teammates before the game – having a nice, little conversation. It just warms me up, and it’s how I get hype for myself.

That is funny and interesting at the same time. I have never heard of anybody getting sleepy easily when listening to music before, but I can understand that psychological aspect behind it. If you could switch lives with one college or NFL player for one day, who would you switch with and why?

… Switch with for one day …

Yeah, you only got one day. So, make it count.

Does it have to be currently – like right now?

No, it can be past, current, or future – if they play of course.

It would have to be Adrian Peterson because he kind of resembles myself in me – he’s really good in how he plays, and I like his game style because he’s a powerhouse. Yeah, Adrian Peterson.

Interesting choice. Last, but not least, well – I’ll give you the choice of which one you want to answer: Do you have any roles models? Or do you have a life motto?

I’ll go with role models. Definitely, my mom. My mom is my biggest role model. She was the one that push me into playing football. She does not give up. She keeps fighting and it doesn’t matter how bad the situation is – just keep going and pushing yourself. She always got me through things, unrelated to football, but mostly to keep pursuing my dreams of going to college.

Aw, that’s so sweet. We just love our supportive moms.

Yeah, we really do. 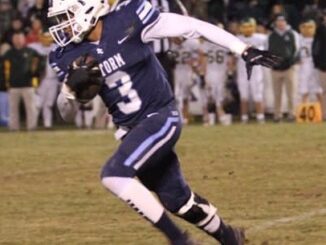 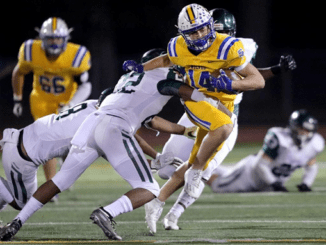