Senior linebacker, Patrick Turner plays for the Highland Park Scots in Dallas, TX. He’s listed as 6-foot-2, 235 pounds, and uses his size and speed to his advantage. He has a strong upper and lower body and shows true athleticism especially at his size. Patrick is an athletic and multifaceted player being that he plays not only football but baseball as well. During his junior season, he accumulated 35 solo tackles, 34 assists, nine tackles for loss, four sacks, two interceptions, and scored one defensive touchdown for an 11-2 team that allowed 19.5 points per game. His performance is no surprise due to the high caliber of Highland Park’s program under the coaching of the legendary Randy Allen. Highland Park won three consecutive Class 5A Division I state championships from 2016 to 2018 and reached the regional semifinals in 2019 against Frisco Lone Star although losing 33-27 in overtime. Patrick describes last season as a “down year” and is focused on making it 1-0 each week and getting back to where the Scots have been the last couple of years, state champions. Patrick gained the attention of many colleges, some of which included Arizona, Air Force, Abilene Christian, Oklahoma State, and Arkansas State. However, he chose the Navy in pursuit of playing for a program with high athletics and high academics, as well as, playing under Coach Ken Niumatalolo who he describes as somewhat of a father figure to him.

When did you start playing football? What made you want to play this sport?

I started playing football probably as early as I can remember. I probably started with flag and went to 11 man with my dad. What really made me want to keep playing the sport was kind of staring into high school, my sophomore year. I started on my varsity team my sophomore year. I just kind of fell in love with it and then we won state. That just capped everything off and set me in the direction I’m on now.

What position do you in baseball? Talk about how your position helps you on the football field.

I’m an outfielder and a pitcher. Baseball has definitely helped me on the football field just by giving me a different perspective from a different sport. Colleges really like guys that play multiple sports because it gives you different movements and gives you a taste of everything. It’s helped me a good amount, but football is a different animal where you really need to be good at your football moves and baseball kind of helps get your mind off football.

What are some goals you have for this season?

Some of my weekly goals would be a leader and have some of the younger guys look up to me. For yearly goals, make it 1-0 every week, get the state championship, and get to where we’ve been the last couple of years. We had a down year last year, so we want to get back where we were and just have fun with it. This is my senior year; it’s supposed to be a fun year. Even with corona, I still want to have fun with my buddies and just be the best me possible.

What has been the highlight of your football career?

What has football taught you about yourself or life?

Being disciplined for sure, but also being a leader, being a captain of the team I’ve really had to look inside myself and ask “Who am I?” and “How am I going to lead these guys?” That’s definitely what it’s taught me and what it’ll continue to teach me when I go play at Navy. It’ll be another level of high and intense football there especially the rigorous training and school there. It’s really taught me discipline, adversity, and leadership.

Coming from Highland Park High School, you know firsthand about the experience of Texas high school football, so what would you say is your favorite thing about playing football in Texas?

Definitely the level of competition. You see all these four stars and five stars out everywhere, but once you get to Texas, those four stars and five stars really show their true colors that this is the best football anywhere, especially high school. Especially playing for Highland Park and playing under Coach Allen, it’s a really special place, a lot of tradition, a lot of great players that came before me. I’m really honored to play there and have the opportunity to play there especially with these great guys I get to play along with. I’m really fortunate and I’m very blessed and thankful.

Do you have a favorite NFL or college athlete?

Where do you see yourself in five years?

I’d love to be training for an NFL Combine, but going the Navy route, I’ll probably be serving somewhere, hopefully internationally.

What motivates you to do what you do (why do you play)?

What really motivates me is the game, I love this game and I think it’s so much fun, it teaches me so much. My parents motivate me, doing everything for them and the opportunity they’ve given me and the position they put me in. Just playing for them and playing for the name on my back is really what I play for, especially my teammates, coaches, and all my friends. Doing it with them just makes it better every day and it’s an awesome experience.

What is something you would like to improve on?

Definitely my attitude sometimes. Sometimes I’m really high and then I get really low. I’m a very emotional player and I overthink a lot, so I just have to be able to train my mind and my body to keep an even keel and rejuvenate my energy without getting too high or too low.

What challenges did you come across in getting to where you are at today?

I haven’t faced many challenges, but definitely, the challenges I’ve faced day-to-day is being able to keep up with such rigorous training. Having to keep with all the talent I play around and just to deal with that is to be able to outwork them and have fun with it too. If you’re not having fun, you’re not going to be able to go out and do what you love every day. It’ll just get tiring and old, so working every day and just being able to do one thing a day. It doesn’t have to be multiple things, just one thing every day will get you better. As Coach Allen would say, “One percent every day.” If you don’t do that one percent every day, you have one percent less, you lost one percent. Being able to do one thing every day to set yourself apart.

What are your strengths as both an athlete and a person?

I’m kind of a guy that loves to have fun and loves to be the voice in the room. I have a lot of energy, but I’m not an energy vampire where I take it all. I try to bring my energy and distribute it between everyone else and kind of give it around. I have a strong personality, I love what I do, and I love helping other people. I’m a very “we not me” type of guy, so I always try to put others before myself and have fun at the same time.

I saw that you committed to the Navy. What made it different than the rest of the schools that offered you?

First of all, Coach Niumatalolo is definitely a guy I would love to play for, He knows when to get on to you when you need it, but he’s just a type of guy you look up to. He’s almost like a father figure like a coach should be. Navy was the perfect blend of academics and football, high academics, and high football, which sparked my interest. They have a great program and a great family environment, that’s really it for me. I never even visited the campus, I never really did all of that college stuff, it was really just family atmosphere, great team, great academics. That’s really what got it done for me.

What is the best part about competing?

The win. You don’t do all this stuff to lose at the end of the day. You want to be the best of the best. Definitely, at Highland Park, I’ve experienced that, and I experienced not being that. You have to work to be the best and that’s the best part.

What is your favorite song to listen to prior to competing?

I’m a little exotic when it comes to that. Usually, a lot of the guys listen to Kanye West and rap and hip hop. I try to listen to more rock and roll and heavy metal stuff. I don’t know if that’s bad or good, but that’s what gets me fired up and get ready to hit somebody. 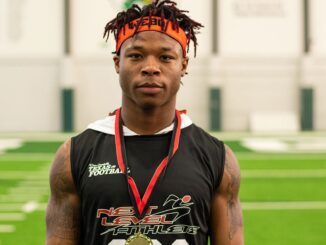 Diamond in the Rough: Gage Larvadain 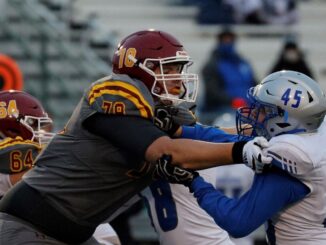