De’Antwan Brown is a class of 2022 wide receiver and safety for Istrouma high school in Baton Rouge, LA. De’Antwan’s speed and aggressiveness makes him a big play maker, forcing many fumbles when he’s on defense. As a receiver, his explosiveness and big play ability make him a dangerous offensive weapon. He is passionate about the sport and is a big team player, always trying to improve his team mates around him. With a 3.0 GPA, it’s clear that De’Antwan carries his work ethic with him on and off the field. After watching his big play ability on the 7v7 circuit this spring with K.R.E.A.M., Gridiron Football is proud to name De’Antwan a 2021 Diamond In The Rough.

What did football teach you about yourself of life once you began playing? Football taught me that it’s a man’s game. You have to remember your assignments, what you have to do, and be in the right place at the right time.

Who or what has been your biggest motivation or role model in the sport? I’ve been watching Julio Jones ever since I was little, but first was Odell Beckham because he went to LSU and I’m from Baton Rouge, so it was cool to have a celebrity that lives here too about to go to LSU. The same thing goes for Justin Jefferson and Jamar Chase. They’re on the next level and that’s where I’m trying to be, so I have to stride to be better.

What is your favorite memory while playing the sport? Just mossing somebody, there’s nothing like catching the ball over somebody and embarrassing them in front of a whole crowd of people.

Are you involved with any other sports or activities at school besides football and if so, how do you think those experiences have helped you on the football field? I run track so that helps me with my speed, I also high jump so that helps me with my hops as well as basketball. I played baseball last year too, but I couldn’t play this year because we didn’t have a team.

Outside of sports do you have any hobbies or passions that you do in your free time and what about them do you enjoy the most? Outside of sports I play some games and watch Netflix. I don’t really go out that much, but when I do I have fun.

What current player, college or NFL, do you think reflects your play stile the most? One safety I’ve been looking up to for a long time is Earl Thomas. On the wide receiver side, I look up to Julio Jones and Odell Beckham because they make some catches that I’ve never seen another wide receiver make before.

For the 2021 season coming up have you set any personal goals and has your team set any specific goals for the season? Building a better brotherhood next season is one of our team goals. Looking out for each other more and having more positive vibes are some things were focusing on. We’re also trying to go to the championship. We made it to the second-round last season but were trying to go farther. Some personal goals that I have for myself this season is that I have to reach 1,000 yards, I have to. I’m going to try to catch every ball that’s thrown to be, doesn’t matter if it is misplaced or not, I’m doing everything I can to catch it.

What would you bring to a college team? What I would bring to a college team is aggression. I’d also bring a lot of challenges to the upperclassmen there, positive challenges but a challenge that I can set for myself and them at the same time to get everyone better. Whenever it’s my time to get on the field no one would be able to stop me because I would have been playing against the best.

This past season was obviously very different with all of the Covid restrictions. What adjustments did your team have to make and how were you all able to overcome that? Some adjustments we had to make were the loses. We had to win just about every game to make the playoffs because we had less games than some other teams. We could have a better record than another team and still get a lower seed. 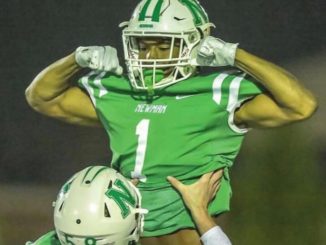 Southern Rallies to a Win Over Jackson State